(Contributed by Itze Monserrat Peña-Andrade) This past weekend a few members from the SSU Winesense Club took a field trip to visit the Santa Cruz wine region. This is a beautiful wine region near the ocean with over 120 wineries in the nearby hills. For more information about the Santa Cruz Winergrowers Association and wine maps, click here. We arrived Friday in Capitola, and set out to visit two small tasting rooms.

The first tasting room we went to was a small winery that produces only 1000 cases a year named Pelican Ranch. We stumbled upon this small winery and were fortunate to get an unexpected tour of the place. They specialize in Rhone and Burgundy style wines that result in rich, complex wines. It’s a quaint little winery that has only been in operation since 1997 and the generosity of the employees made this a great experience that we all really enjoyed.

The second winery that we went to was Armida Winery and just like the first winery, we happened to drive by and decided to stop.  Located in Capitola, the Armida tasting room is one that shouldn’t be missed.  It is located near the ocean and the view is beautiful, it’s a great place to stop by for it’s nestled amongst a variety of fun shops in the center of Capitola. Armida also has a location in Sonoma County, so some of us were familiar with the brand. We tried their famous Poizon zinfandel wine that comes in a coffin shaped box, and it was a huge hit.

The following day, we drove 2600 feet above Highway 17 to our next destination, and – unanimously – our favorite tasting of the trip: Loma Prieta Winery. The winery is actually known for being the largest producer of Pinotage in North America, and the view from the tasting room is absolutely breathtaking. The employees went above and beyond to make our experience enjoyable and it showed for we spent several hours there tasting and eating the day away.  Aside from tasting, we played some games outside, including a giant chess game, and the time just flew by. It is a winery we all really enjoyed and would definitely recommend.

The quick weekend trip was a great success. All the members and board members that were able to go had a great time and we were introduced to some new wineries that we all hope to revisit again. It is a trip that we won’t soon forget and recommend future members to attend.

(Contributed by Itze Monserrat Peña-Andrade) This week’s SSU WineSense Club meeting was quite thrilling in that we welcomed Francis Ford Coppola Winery for the very first time. The meeting and educational tasting was led by Kevin Patterson and Kaila Medina, both Hospitality Professionals working in tasting room operations. They provided information about the history, products, and special amenities at the winery.

Nestled on what was formerly Chateau Souverain Winery in Geyserville, California, Francis Ford Coppola Winery is a winery that is not to be missed.  When the winery was being renovated, Francis had a vision that it:

“Should be like a resort, basically a wine wonderland, a park of pleasure where people of all ages can enjoy the best things in life – food, wine, music, dancing, games, swimming and performances of all types. A place to celebrate the love of life!”

Today his vision is a reality, and the Coppola Winery is truly a Wine Wonderland!  Influenced by Tivoli Gardens in Copenhagen, the winery offers many delights for the visitors of all ages. With swimming pools, bocce courts, restaurants, event rooms, multiple tasting bars, and a Hollywood movie museum, the winery over delivers with fun activities to while away an afternoon and evening.

Some of the unique features include several of Coppola’s Oscar statues, along with memorabilia from his movies, such as Vito Corleone’s desk from The Godfather and a restored 1948 Tucker Sedan as was used in Tucker: The Man and His Dream. 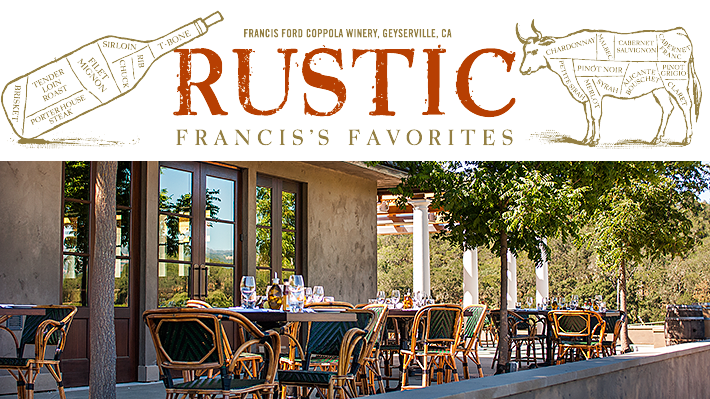 Kevin and Kaila led the members of WineSense club through a tasting that featured a diverse selection of five Coppola wines:

They explained the special characteristics of each wine we tasted, and provided background information on the labels and unique packaging. These five delicious wines were but a glimpse of the many wines that Francis Ford Coppola Winery offers, and we were invited to visit the tasting room in the future.

Favorites Wines of the Evening

At the conclusion of the meeting, the Millennial participants were asked to vote for their two favorite wines of the evening. The winners were:

(Contributed by Itze Monserrat Peña-Andrade) The story of Duckhorn Winery and how it has expanded on its waterfowl theme over the years was the topic of our most recent SSU WineSense Club meeting. Led by winemaker, Michael Accurso, he captivated the audience with both words and a tasting of four delectable wines.

A Little Bit of Duckhorn History

As time passed on, Duckhorn added more brands to its winery, making sure to keep to the waterfowl theme. This was not only because Dan and Margaret had a last name of “Duckhorn,” but because they have always enjoyed birds, especially waterfowl. Therefore, the first brand they added was Paradox in 1994, followed by Golden Eye, Migration, and Decoy and Canvas Back in the ensuring years. Today several of these brands have their own winery with tasting rooms open to the public.

Michael led the members of WineSense club through a tasting that featured four of the brands offered by Duckhorn.  These included:

The Favorite Wine of the Evening

At the conclusion of the meeting, the Millennial students in attendance were asked to vote for their favorite wine of the evening. Each participant could vote once and the favorite of the evening was the 2012 Goldeneye Pinot Noir.

It was an enriching night, the educational tasting that Michael provided kept everyone entertained and laughing. We can’t thank him enough for joining us in leading us all through this fantastic experience!